Hi all, I’m writing this as an update for what I plan to happen regarding the LED badges.

Based on the experience Rynwar and I had with them at BLFC, there’s a huge demand for something like these. In attempting to research what other people have done, I’ve run across a few other similar things but nothing quite as advanced in terms of color patterns and brightness. There are a number of people who print art onto acrylic or have laser engraved acrylic using art provided by the client. I have not found anyone else using RGB LEDs to create animated effects or ones that can be recharged instead of requiring replaceable batteries. From BLFC, they seem to last for about twelve hours on a single charge on the lower brightness mode. The final product likely would contain a larger battery for even longer battery life.

So far one artist has brought up the possibility of partnering to create artwork for the badges. I’d definitely like to pursue something like that instead of having to deal with the client providing artwork which may not be ideal for the engraving or they may not have permission to use.

Looking around has provided me with interesting ideas for dual layer acrylic which allows for multiple colors at once but I’m not sure how feasible this is with my current design. I believe it would be a very cool effect to get dual color artwork or a name that could flash independently of the artwork. In continuing to improve the features I’m also evaluating whether or not sound reactive patterns are possible (and it currently does seem likely I will be able to add reactive effects).

If you’re not already familiar with what they look like, here’s a few photos. 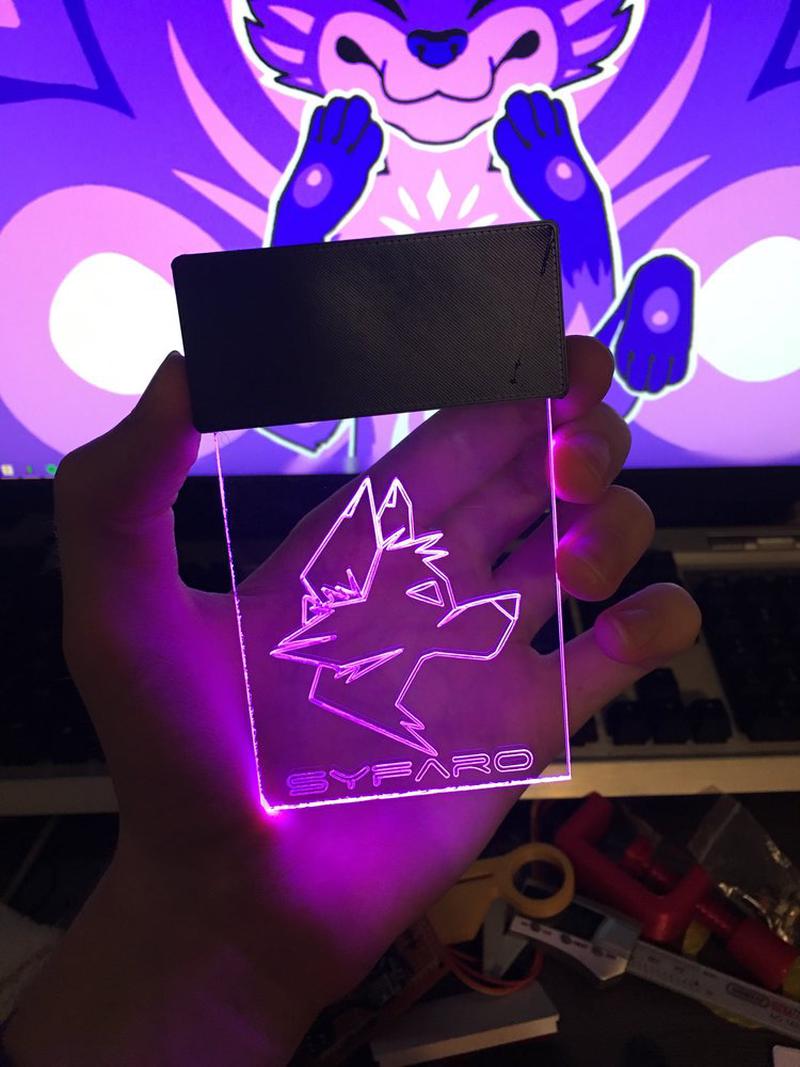 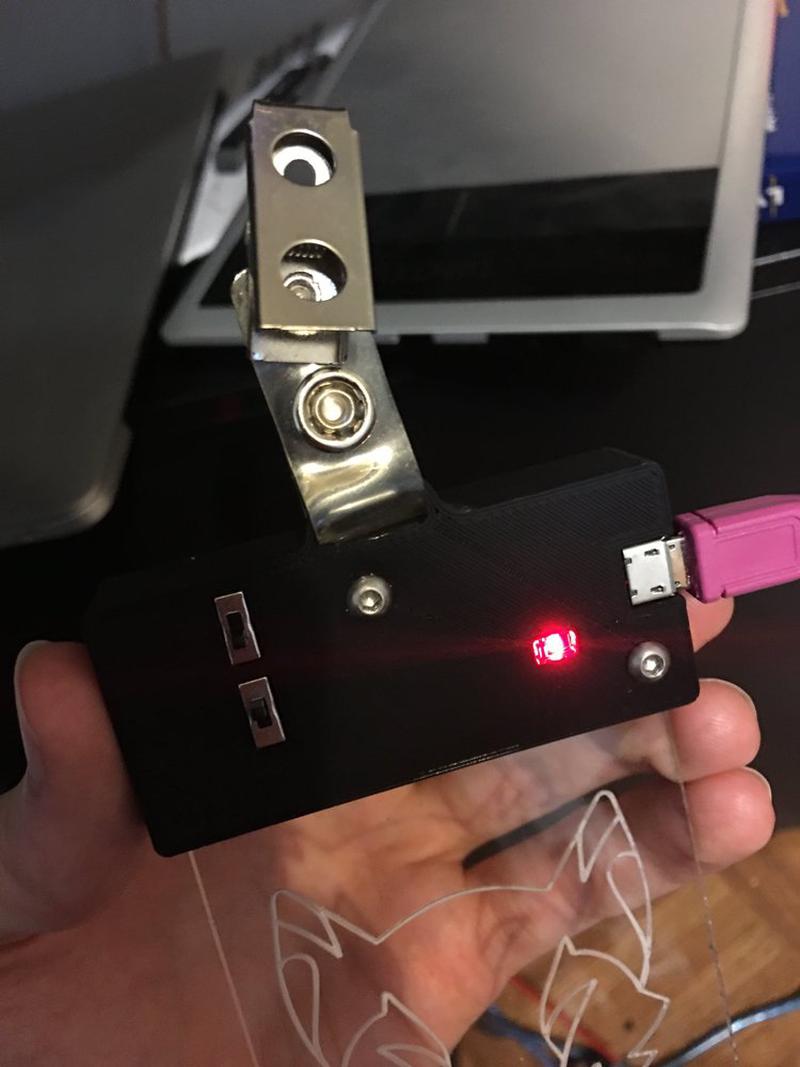 There’s a number of issues with the current revision such as poor user interface (a single switch that controls mode and brightness), a large and clearly 3D printed case, and general imperfections in the acrylic (it was cut quickly on a table saw).

Moving forward, there’s a number of refinements that must be reached before they could be sold. I have to figure out a new interface that allows enough configuration without being uncomfortable to use, how to cut and engrave the acrylic without imperfections, and generally improve the reliability and sturdiness of it. Hot gluing the acrylic in place worked well enough for a weekend but it does not feel sturdy. Even with being careful with them, the acrylic was covered in micro-scratches from the weekend. Although these scratches are not visible unless looking at the right angle, evaluating some kind of protective coating seems worthwhile.

The internals must also be significantly improved before I could manufacture them at any kind of reasonable rate. Currently, there are a number of hand soldered components pressure fit into place combined with off the shelf boards I already had. This means the space isn’t used as efficiently as possible and the wires are potential points of stress and failure. I’ve been looking into a PCB design which will allow for more advanced features such as a microphone for sound reactive effects and better charging indicators. After finishing this design and sourcing the required components, I’ll be able to get a better idea of how much each one of these costs to produce and therefore be able to determine how much they will be sold for. 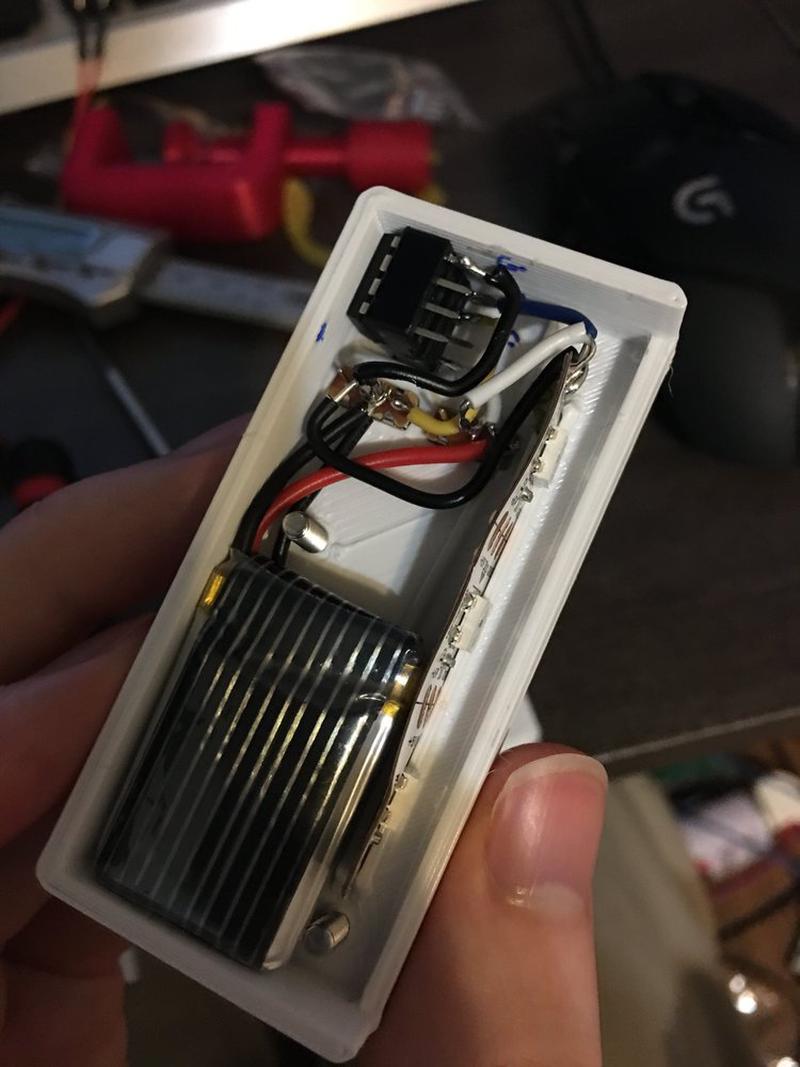 I’m hoping I’ll be able to figure out all these issues within a few months. Once I have working prototypes for a more refined product, I’ll open preorders but I cannot guarantee a date for this yet.